History Conversations
Enjoy our History Conversations, a program featuring weekly virtual lectures from our talented corps of speakers covering a wide variety of local history topics. Each lecture is live-streamed via Zoom and then posted here for a week.

REWIND – Preserving Historic Cemeteries
With Glenn Wallace
Rewinds are pre-recorded and available for one week. No registration is required. Don’t miss these great talks!

Next Week
The Nurse and the Midwife: The Story of Clara Barton and Emma Jones of Gibson Grove 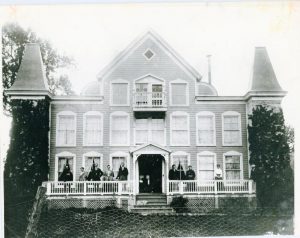 Clara Barton touched many lives as the Civil War’s “Angel of the Battlefield” and later as president of the American Red Cross. Behind the scenes, others supported her efforts and kept her household running smoothly. Among the many Black people Barton employed over the years, none maintained a closer, longer-lasting relationship with Barton than Emma Jones of the Gibson Grove community in Cabin John. Researcher Paige Whitley traces this relationship from its beginnings and Jones’ own successful career as a midwife in lower Montgomery County.
Register here.
Paths to the Present

Paths to the Present: Montgomery County Stories, a cable television show created by County Cable Montgomery and Montgomery History from 2000-2014, explores the often overlooked history found right in our own backyards. Produced by Emmy-winner Barbara Grunbaum and hosted by Gail Street, Paths to the Present covers a wide variety of topics highlighting this county’s past. You can watch all 86 of the episodes here.