The Montgomery County Story, published by Montgomery History since 1957, features scholarly articles on topics of local interest. It is the only journal solely devoted to research on the rich and colorful past of Montgomery County, Maryland. All issues can be viewed online for FREE through our digital repository, with searching available on author, title and keyword. 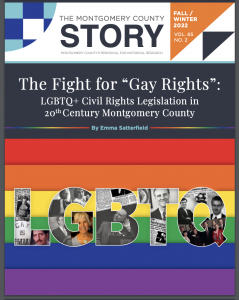 Our most recent issue, Volume 65: Number 2, features the stories of two landmark legal cases regarding LGBTQ+ civil rights, right here in Montgomery County. You can read it and download it FOR FREE here.

From Maryland’s colonial beginnings until as late as 1990, same-sex sexual relations were punishable by law, and in 1973 Maryland became the first state to explicitly ban marriage between individuals of the same sex. The absence of legal protections also had a negative effect, as LGBTQ+ people had limited ability to combat acts of discrimination and violence against them.

During the mid-twentieth century, the tide slowly began to turn as LGBTQ+ organizations like the Suburban Maryland Lesbian/Gay Alliance (SMLGA) and the Montgomery County Gay and Lesbian Interests Consortium (GLIC) formed and laid the groundwork for future political movements. Two milestones in LGBTQ+ rights were achieved with the passage of an anti-discrimination bill establishing sexual orientation as a protected status in 1984, and the establishment of a domestic partnership registry which extended employment benefits to the same-sex partners of county employees in 1999. This article describes the years of advocacy, education, and legal work by LGBTQ+ community organizations and allies to achieve these two milestones for civil rights in Montgomery County.

To learn more about LGBTQ+ community history in Montgomery County, check out our online exhibit.

The Nurse and the Midwife: The Story of Clara Barton and Emma Jones of Gibson Grove by L. Paige Whitley and Rockville’s Old Clock by Cara Seitchek

The story of Emma Jones of the Gibson Grove community in Cabin John and her longtime relationship with employer Clara Barton; the story of the c.1805 tall clock made by Jesse Hayden in Rockville.

“The Unwritten Law of Maryland”: The 1896 Lynching of Sidney Randolphby Sarah Hedlund

Sidney Randolph, a native of Georgia in his mid-twenties, was lynched in Rockville, Maryland on July 4, 1896 by an officially-unidentified group of white men from Montgomery County. 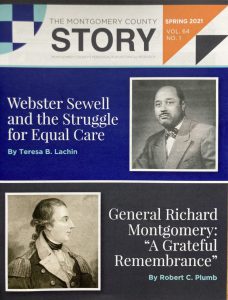 Webster Sewell and the Struggle For Equal Care by Terry Lachin and General Richard Montgomery: “A Grateful Remembrance” by Robert C. Plumb

The story of Webster Sewell, Montgomery County’s only Black doctor during the 1950s and early 1960s; and the story of Richard Montgomery, namesake of our county.

To Order Physical Copies of Current or Past Issues:

Printed copies of the Montgomery County Story may be ordered by phone or email.  Issues dated prior to 2010 are $3 per issue. Starting in fall 2010, issues are $5 each (double sized/color). Shipping is $1.50 for the first issue plus $0.50 for each additional issue in the same order. Contact the Office Manager Stacie Vodra at 301-340-2825 or SVodra@MontgomeryHistory.org for assistance.