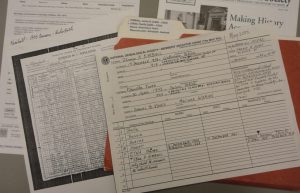 Information on our Resources

Following is an overview of the resources available at the Jane C. Sween Research Library and Special Collections. Click on the underlined links to access collection searches or lists of material.

For information on our artifact collections, visit this page.

Books
The Jane C. Sween Library in Rockville now has over 5,000 books, most of which are partially catalogued at the link above and in the Montgomery County Public Library (MCPL) catalog. The primary focus of this collection is the history of Maryland and the development of Montgomery County from the pre-colonial period to the present including genealogy reference books, biographies, and published Maryland county records. The state and local histories of Delaware, the District of Columbia, Pennsylvania and Virginia are also strongly represented.

Cemetery Records
The library holds tombstone inscription readings on index cards from 111 cemeteries and family burying grounds indexed by name (survey done in the 1970s), as well as lists of interments (linked above) and published books of collected interment records from various cemeteries in Maryland, Washington, DC, and Virginia. The card index of tombstone readings represents more cemeteries than those linked here.

The Library also retains copies of the general survey materials on all known Montgomery County cemeteries, prepared by the Coalition to Protect Maryland Burial Sites working with Peerless Rockville and completed in 2008. For the 2018 updated cemetery inventory data, as well as digitized versions of the 2008 surveys, visit their website hosted at Montgomery Preservation.

Church Records
Births, marriages, deaths, and other information copied from the record books of numerous churches in Montgomery County, indexed by name. Photocopies of the original records of several Catholic, Episcopal and Methodist churches in the County. The card index contains records from churches beyond those represented at the link above. The Library also collects general historical information on Montgomery County places of worship–including newspaper articles, history publications, pamphlets, anniversary programs, and events– for reference and research (see Vertical Files below).

Deeds and other land records are also available online through mdlandrec.net and plats are available through plats.net.

For ease of research, the Sween Library provides abstracts of the following records:

We also have records for the following:

Family Records
The Library maintains an extensive amount of genealogical material organized by surname, including family trees, ancestor charts, family group charts, copies of original documents (letters, wills, Bible records, photographs), and prior research compilations. Additionally, Library staff have clipped and maintained files of biographical material on hundreds of Montgomery County residents, primarily consisting of obituaries and other newspaper articles. *note: a portion of the family files have been described in our online collections database but entry is ongoing. Not all families are yet represented.

Maps
This collection includes atlases and maps of Maryland and Montgomery County dating from the early 19th century to the present. These include area maps, topographical maps, maps of local jurisdictions, neighborhoods, and plat maps which detail the structures built in an area at various times. The most frequently used maps of Montgomery County include the 1865 Martenet & Bond map; the 1879 Hopkins Atlas; a B&O Metropolitan Real Estate map of Rockville in 1890; maps of “The Vicinity Around Washington”: Hopkins 1894 and Baist 1904; the 1916 Deets & Maddox real estate atlas, the Klinge real estate atlases ranging from 1931-1959, and the Lusks real estate directories and property maps, ranging from 1951-1993. We also have Sanborn fire insurance maps for selected portions of Montgomery County, updated through the mid-1960s.

Newspapers
This collection contains news-related publications reporting on the Montgomery County area from the early 19th century through the 21st century, including rare issues of Rockville and Maryland papers published from 1800-1850, numerous Montgomery County weeklies and bi-weeklies published between 1878 and 1995, and newspapers and periodicals from Rockville, Kensington, Damascus, Bethesda, Chevy Chase, Silver Spring, Wheaton, Gaithersburg, Potomac, and many more– offering broad coverage of area events and people. The title link above provides the catalog listings for all newspapers and periodicals in our collection. Here is a list of newspapers, sorted by time periods they cover.

Montgomery County Gazette
We are in the process of digitizing the Gazette following our New Life for Old News campaign in 2020. Currently, issues from 1960-1965 and 1977-1986 are keyword-searchable and accessible from our reading room computers, along with the County Courier, 1973-1981, and its successor the Courier-Gazette, 1981-1986. More about the Gazette.

Oral Histories
The Sween Library has collected a large number of oral histories, including transcribed interviews with over 80 residents of Montgomery County. These transcriptions are available for research on varied topics including family/community life, politics, development, reminiscences, military service, businesses, schools, agriculture, and much more. Interviews were conducted from the 1950s through the present day. (Audio recordings are sometimes restricted due to condition or format). See also the Oral History collection maintained in the Montgomery County Archives.

Photographs
The Library’s vast photograph collection, searchable at the link above, consists of 8 x 10 prints, 3 x 5 snapshots, photographic slides, and postcards depicting Montgomery County’s changing landscape from the mid-19th century until today. In addition to views of area street scenes, residential and commercial buildings (exterior and interior views), and countryside, there are hundreds of images of people and events important in the county’s history. The photographs in our special collections consist of rarer and more fragile photographic media, including daguerreotypes, tintypes, cabinet cards, glass plate negatives and oversized/framed portraits and group photos.

Special Collections
The Jane C. Sween Library is the repository for the archival records of a number of notable Montgomery County residents, businesses, and organizations. In addition to photographs and other audiovisual materials, this material consists of varied documentation of life in Montgomery County, including (but not limited to) diaries, almanacs, correspondence, vital documents (wills, deeds, legal papers), meeting minutes, publications, business ledgers and receipts, school yearbooks/publications/memorabilia, scrapbooks, blueprints/architectural drawings, and authors’ research notes.

Vertical Files
Material in the vertical files primarily consists of newspaper clippings organized by subject, then chronologically with date ranges of late-19th century to early 21st-century articles. Other material included in the files can take the form of reports and other publications, booklets/pamphlets, written histories/short memoirs, copies of Maryland Historical Trust inventories of historic properties, and other printed or compiled information. A list of folder headings can be viewed at the link above, including (but not limited to) files for each town or community in Montgomery County, as well as information on public schools, historic houses, crimes, businesses and organizations, religious establishments, mills, clubs, and many other subjects pertinent to Montgomery County’s culture and history.