George Washington Peck was the first recorded of the three known men who were lynched  in Montgomery County, Maryland in the 19th century. Born into slavery, Peck lived in the Poolesville/Beallsville area his entire life, which was about 22 years. In January of 1880, he was accused of attempted assault on a white girl and arrested by the constable. Before he could be transported to Rockville for a trial, a crowd of local men seized him in the night and hanged him from a tree in downtown Poolesville until he died.

The only accounts that survive of his murder are those published in local newspapers, including the Montgomery County Sentinel, the Baltimore Sun, and the Washington Star, and other papers that picked up the story via the associated press at the time (Shepherdstown Register and Wheeling Register, both from West Virginia). These accounts are inconsistent with each other and demonstrate clearly racist bias against Peck: stating his “guilt” outright (though he was neither tried nor convicted, merely accused) and using inflammatory and derogatory language to contribute to his condemnation in the court of public opinion.

From the distance of 140 years, it is impossible to ever discover the true nature of the incident. However, we can not only recognize the injustice of one life cut short without due process, but also imagine the continued terror inflicted on the lives of Black people in a small town, barely fifteen years out of enslavement, whose neighbors, employers, and community / religious leaders thought so little of violently murdering a man in the dead of night, based only on unsubstantiated charges. This event and its aftermath constitutes a cruel injustice and a shame that can never be forgotten or erased. 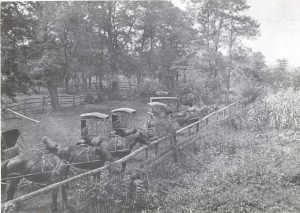 The fence across the road from Poolesville Presbyterian Church, as is appeared c. 1890s. The location shown in this photo is believed to be the closest approximation of the site where George Peck was killed in 1880.

We invite you to read George Peck’s full story below, pieced together from newspaper articles, census records, and other sources. It is the most accurate account that can be assembled at this time, based on available documents.

The information used to compile this authoritative version of events is provided in several categories below. In addition to providing the newspaper accounts cited in the narrative, we are sharing full versions of the maps and atlases used to geo-locate these events, as well as short biographies of the named participants, outlining their personal backstories and relationships beyond what is possible to share in the narrative. Also included under “original documents” is an entry from the Justice of the Peace docket kept by S. George Donohoe, which documents both Peck’s arrest and the jury of inquest assembled after his murder [Source citation: Maryland State Archives (T2488 District Court 6 Docket, Montgomery County) S. George Donohoe, 1876-1890, p. 16].

On November 3, 2019, the Montgomery County Lynching Memorial Project, in coordination with the Equal Justice Initiative (EJI) of Montgomery, Alabama, conducted a public ceremony of remembrance and reconciliation to honor George Peck. The program, held on the grounds of Poolesville Presbyterian Church, included statements by local religious and community leaders, a proclamation from the Montgomery County Council, and readings of poetry by local high school students. At the conclusion of the ceremony, participants gathered across the street to collect soil from the approximate site of George Peck’s lynching in Poolesville. One jar of the soil was given to the EJI representative for display in the Legacy Museum in Alabama, and five additional jars were distributed to local cultural heritage organizations, including Montgomery History. Watch the video below to learn more about the ceremony.